The Diocesan Museum of Jesi was founded in 1966 in order to collect, preserve and enhance the vestiges of religious art coming from the territory around the town.
At present it preserves a wide cultural and artistic heritage that belonged to the churches of the Diocese, dating between the 4th and the 19th centuries.
Housed in some rooms of Palazzo Ripanti Nuovo, next to the Cattedrale di San Settimio, the museum is a meeting point between the beautiful and the sacred, the century-old traditions of Christian communities of the Vallesina valley and the community living at present in this territory.
The museum does not only preserve memories, but has also got a rich section of contemporary art, resulting from the present dialogue between art and faith in local and national artists.

The Diocese of Jesi
According to a century-old tradition, the local church was founded by Saint Septimius, the first bishop of the Roman colony called "Aesis", who was martyred at the beginning of the 4th century because of his evangelization work in the territory.
The bishop's see is the town of Jesi, where the cathedral was consecrated in 1208.
The Diocese includes most towns of the Vallesina valley, old villages founded on the tops of the hills surrounding the valley of the Esino river: Castelbellino, Castelplanio, Cupramontana, Maiolati Spontini, Monsano, Monte Roberto, Montecarotto, Poggio San Marcello, Rosora, San Marcello, San Paolo di Jesi, Santa Maria Nuova. 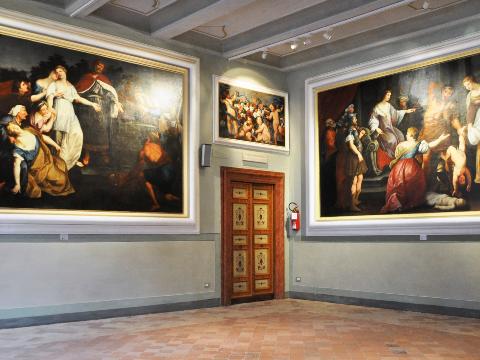 Special openings: please visit the Facebook page or website
Closed on public holidays. Guided tours for groups: by appointment only